Can’t find what you’re looking for?

Living and Working in the Diocese of Salisbury 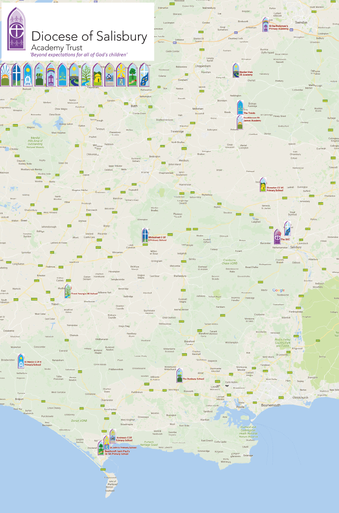 The Salisbury Diocesan Board of Education (SDBE), formed in 1830, is one of the oldest formal diocesan bodies. Many of the church schools were founded before that date, and the Board, or Council as it was called then, was formed to support their work and to promote new schools.  The Diocese today extends over 2000 square miles, with a population of just under 860,000.  There are a total of 195 schools and academies serving 40,000 children.

The Diocese of Salisbury Academy Trust (DSAT) was established at the end of 2013 to provide a home for schools within the Diocese of Salisbury who wanted to convert to academy status.  Whilst the Trust is a separate entity to the Diocesan Board of Education (DBE), they work together in dynamic and strategic partnership to transform provision and outcomes for the children in their care.

Alongside its improvement work in its current member academies, the Trust is working actively with other schools and the Regional Schools Commissioner (RSC) to grow its family of academies.  This will enable a greater level of system-led improvements, further opportunities for collaboration between leaders and staff at all levels of the organisation and better economies of scale, vital in the current challenging economic climate.

DSAT provides an opportunity for schools to convert to academy status in a way that is different to many academy trusts.

Wiltshire is home to the best preserved copy of the Magna Carta in the magnificent Salisbury Cathedral, the heart of Salisbury Diocese. Not only the UK’s tallest medieval cathedral spire but as quoted by Bill Bryson in Notes from a Small Island;

How wonderful to be part of this, as well as so many other highlights of the west country: the highest concentration of prehistoric sites in Europe; the World Heritage sites of Stonehenge and Avebury; England’s first safari park at Longleat, and National Trust and historic homes at Stourhead, Bowood and Wilton House, set in surroundings made famous by palladium landscapers.

Discover an endless variety of music, literature and art festivals, food and drinks events, village fetes and local markets.  Wiltshire has year round activities including sporting events at Salisbury Racecourse and Castle Combe racing circuit as well as traditional events such as the Downton Cuckoo Fair and the Wessex Country Fair.

For theatre goers there is not only the Salisbury Playhouse but the Wiltshire Music Centre in Bradford-on-Avon, Salisbury Arts Centre, the Lighthouse Arts Centre in Poole and many local amateur dramatic, art, literary and music societies.

Wiltshire is proud to have award-winning dining with three Michelin starred restaurants at some of our prestigious hotels as well as AA rosettes for fine dining. Keep an eye out for the Wiltshire Food & Drink logo which is awarded to properties that meet certain criteria regarding sourcing local produce. The keen foodies may want to follow one of the food trails, head to one of the Wiltshire farmers’ markets for fresh produce directly from the supplier, or perhaps improve your culinary skills at a cookery school.

Wiltshire is also lucky to have some fine vineyards and breweries, including the Wadworth Brewery famed for its 6X bee and Bishop’s Tipple and the Hopback Brewery selling wonderful flavours such as Summer Lightning and the Crop Circle! Why not also sample local cider and apple juice found in the local farmers’ markets.

Dorset has such a varied range of great attractions there is certainly something to suit every taste.  Dorset boasts some of the finest stately homes and gardens in the country and has a rich heritage with some stunning castles and forts that will transport you back to years gone by. For history buffs Dorset is a must. Home to some of the most intriguing museums, with collections from war time history, to the wonders of  Dorset’s Jurassic Coast. Not forgetting the younger members of the family, Dorset has some fabulous family attractions to entertain. From children’s’ farms to steam trains and activity centres to high wire adventures, the children will be more than happy.

If you are after clear air, sweeping cliff walks, breathtaking views and snug little towns brimming with restaurants and shops to explore, Dorset is for you! Dorset is as multi-layered as the famous fossil flecked cliffs along its Jurassic Coast - a stunning stretch of shoreline that has been designated a Natural World Heritage Site by UNESCO due to its outstanding geological make-up. The charming countryside Dorset has to offer has been designated as an Area of Outstanding Natural Beauty and it is easy to see why.

There is more to Dorset than just fabulous scenery and magnificent coast - the history of this county is rich and vivid. How many areas do you know that can boast a huge naked chalk giant, England’s first Natural World Heritage Site and Maiden Castle, the largest hillfort in Europe!!

All over Dorset there are charming market towns and tiny villages tucked into tranquil rurality. Each town has its own individuality, character and history to relate.

It is no wonder that the area has captivated film and TV makers from all over the world. Productions of all kinds have been filmed on location here, with Dorset’s unspoilt countryside, dramatic coastline and spectacular historic houses and gardens being used as a backdrop to the action.

Dorset is also renowned for its year round events calendar holding some rather famous international festivals such as the Great Steam Fair and the Chalke Valley History Festival, that help to enhance its glowing reputation as a fantastic destination. From small local community events in some of Dorset’s beautiful towns and villages, to large-scale festivals and seasonal events with turnouts in the thousands. If music and the arts are more your thing then keep your eye out for acts performing at Dorset festivals and concerts.